History of the Fiat 500 Club Italia

In 1983, the Municipality and Proloco of Garlenda (Italy), thinking about an appealing event that could give notoriety to the town, planned a gathering of Fiat 500, a car still widespread and used by the locals. The first edition took place on July 15th, 1984 and, while drawing about thirty participants only, it started a virtuous cycle that lasts until today. The engineer Dante Giacosa took part in it: he was very impressed by "the more unusual and commendable initiative of giving a new breath of life and prestige to the Fiat 500"; the great designer would remain in contact with the club with affection and esteem, until his death in 1996. Among the first 'cinquecentisti' there was also the future president Gian Paolo De Capitani from Alassio and Mario Ferrando from Genoa, later to become one of the pillars of our Club. The then Mayor of Garlenda, Domenico Romano, and his friend Giuseppe Nespolo heard from two Dutch tourists of the existence in the Netherlands of a club dedicated to the Fiat 500, founded in 1980: this fact prompted them to leave for Holland. That trip will mark the birth of the "Amici della 500" (Friends of 500), the first nucleus of the Club. In 1985 the participants in the meeting were 100; even 300 in 1986 and went up to the stage of the event celebrities such as Gianfranco Funari, Sandra Milo and the young Piero Chiambretti and Simona Ventura (Alassio's Miss Muretto of that year), but also the Fiat Vice President, Giovanni Nasi, and his wife Marinella. In 1987 took place the first European tour, with a hundred cars, left from Geleen (NL).

The same year was issued the first book on the 500 by Romano Strizioli, with the Walter Molino's cover, presented in the Pippo Baudo's RAI TV show "Uno su cento". It was the beginning of an important and growing media exposure for the association that would become in a short time international. In 1989 it was founded the social magazine "4piccoleruote" (4 little wheels), bimonthly Color 68 pages, 25,000 copies/each issue. It was time for the "Amici della 500" to give themselves a more structured and official organization: that was how was born on March 13, 1990 the Fiat 500 Club Italia. The founder Domenico Romano became honorary president, while Gian Paolo De Capitani assumed the presidency. Article 2 of the Statute reads: "The Association aims to: promote and maintain the interest for the Fiat 500 in its valence of social phenomenon and lifestyle; encourage, in the common love for the Fiat 500, friendship and solidarity among people, without distinction of age, social class, income, nationality or race; create and promote opportunities for interaction and exchange between the lovers of the Fiat 500; promote and implement initiatives aimed at preserving the ability of movement and functionality on street of the Fiat 500s". During 1991 the Club reached the quota of 1,000 members; it intensified relationships with foreign fans (eg with the Japanese, thanks to the Italian trustee, Andrea Fortunato) and developed events locally in the various corners of the Peninsula.

1995 saw the enrollment of the first Fiat 500 to the A.S.I. (AutoMotoClub Storico Italiano). Enrico Bo, Technical Advisor of the Club, participated in the session for approval, surpassing it brilliantly. In 1998 it took place the first "Befana at Gaslini": since then, every year on Epiphany, a delegation of the Club, the Municipality, the Pro Loco and 'White Cross' (like the Red Cross) of Garlenda goes to the "Gaslini" Pediatric Medical Institute, in Genoa, to deliver presents to the young patients. It is not the only charity initiative involving the Fiat 500 Club Italia, which often works with events in their voluntary associations engaged in various fields. In 2000 the Club is federated to the A.S.I.   Gian Paolo De Capitani with perseverance, nobility and enthusiasm, gave a significant boost to the life of the Club; to his memory was entitled the hq office of Via Roma 90. After him, the position was held by Marco Maglietti, Franco Cerva and Marino Ribet; each of them has done good by giving its contribution to the development of the Club and its dissemination among the Cinquecentisti. With the new millennium comes a woman as president: Silvia Depaoli from Turin. The president and the directors of the club pointing much on expansion and strengthening of trustees throughout Italy, achieving great results. In 2004 our Club establishes the Registro Storico di Modello (Historic Register of Model), designed to survey the historical 500s still circulating, recommending the proper restoration of the car depending on the type and year of construction. The attention of the media and the world of advertising on "500 phenomenon" gets bigger. 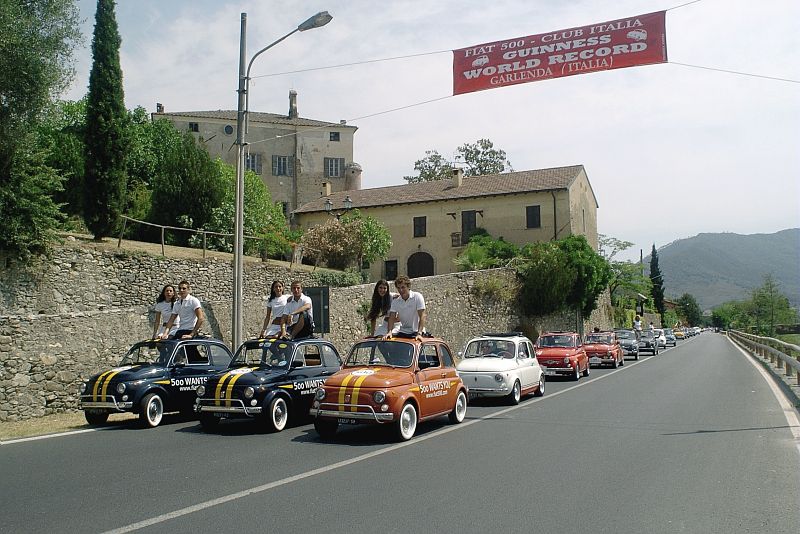 In 2005 a first record of participants in the meeting of International Garland is established: 622 cars come from all over the world. In 2006, at the Winter Olympics in Turin, Dutch medal winner athletes are brought to the festivities with a Fiat 500. The closing ceremony sees parading the Olympic stadium a Fiat 500 while the Paralympics will bring out the cars of our Delegation of Saluzzo. At the Meeting of Garlenda, participants are 754, which allow not only to realize the inscription "500" at the Hippodrome of Villanova d'Albenga (the aerial photo will travel around the world), but also to win the Guinness World Record for the largest parade of Fiat 500 cars that winds between Villanova and Garlenda. A delegation takes part in the celebrations for the twenty-fifth of the founding of the Dutch 500 Club, where, in the presence of representatives of the European Club, the foundations are laid for the XXIV Meeting Fiat 500 with a new edition of Tour Europe.
In 2007 we celebrate 50 years of the 500; the whole world pays tribute to the "great little car that has helped Italians to grow". Fiat also has its new car of the same name and inspired by the lines of the famous "grandmother". The "granddaughter" is thus held in baptism by veteran, during a spectacular event in Turin, on July 4th and 5th, that sees a preview of the Meeting of Garlenda. On July 6th, the Cinquecentisti in the main city of Piedmont move into the Riviera and are added to those who already agreed or are agreeing in the "Capital of the 500".  And Garlenda really becomes the "caput mundi" of the mythical compact car: not only "Multimedia Museum of the 500 Dante Giacosa, documentation center for road safety education" is inaugurated, but will be well 1,438 crews from more than 20 nations to parade 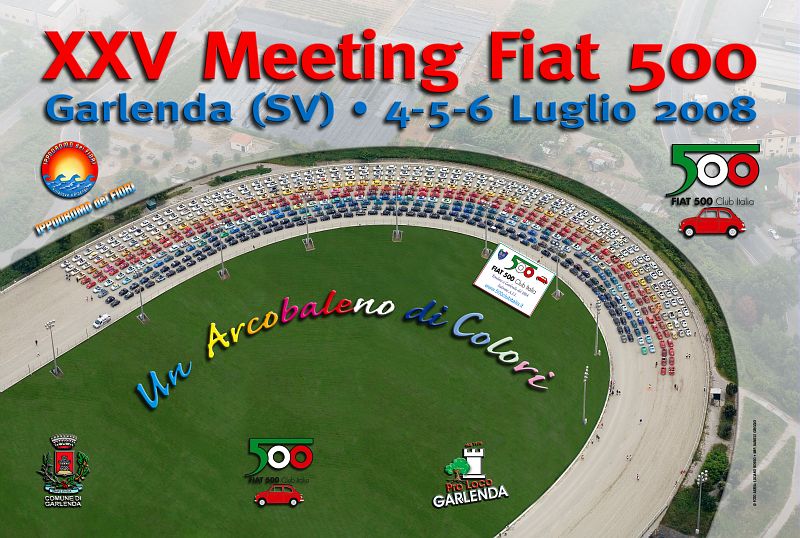 at the Hippodrome of Villanova d'Albenga for an Olympics-style ceremony that excites and moves. It was presented the book "Fiat 500 - History of a passion", written by the founder Domenico Romano and by the press officer Stefania Ponzone, which collects the basic steps of life of the Club, many anecdotes and reflections and a photographic documentation.
The Meeting of Garlenda, thanks to the direction of Alessandro Scarpa, enriched year after year of events always new and more engaging: excursions, exhibitions, concerts, lectures and a spectacular "choreography" of cars: in 2008 the Meeting celebrated with a giant "Rainbow Mobile" successes of the association.
In 2009 he inaugurated the new version of the website and Stelio Yannoulis, from Bologna, becomes president. Important step in 2010, when the Club was named UNICEF Testimonial and debuted with its own imprint "500 Club Italian editions" with the book for charity "La favola del Cinquino" (The tale of Cinquino).
It takes place at the Museum on the first Day of Road Safety Education, with the involvement of over 200 children. The initiative has become an important annual event and has seen the creation of the award “Crescere Sicuri” (Growing Safe), delivered to people or organizations that have distinguished themselves in the important task of raising awareness to the issue of road safety.
In 2011 the members of the Club exceed the quota of 21,000. In 2012, during the XXIX International Meeting Fiat 500 of Garlenda, the first video footage broadcasted live on our website to allow fans worldwide to follow the most important event of the year. The gatherings across Italy intensified and focused on quality, often emphasizing aspects of Italian tourism: in 2014, in fact, the concept "Slow Drive" is launched, the slow movement that says "no" to the highways in favor of rediscovery of responsible tourism, between villages and scenic drives. In 2015 the commitment relating to the important issue of road safety is even more important thanks to the extension of a week of the annual event realized in favor of education for young people; 700 students of all levels from all over Liguria participated in this event "Crescere Sicuri" in collaboration with the Traffic Police. In this edition of the award "Crescere Sicuri" was awarded the association "Lorenzo Guarnieri". 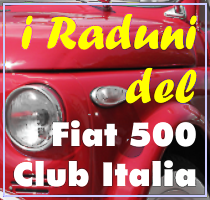 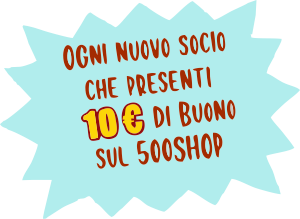